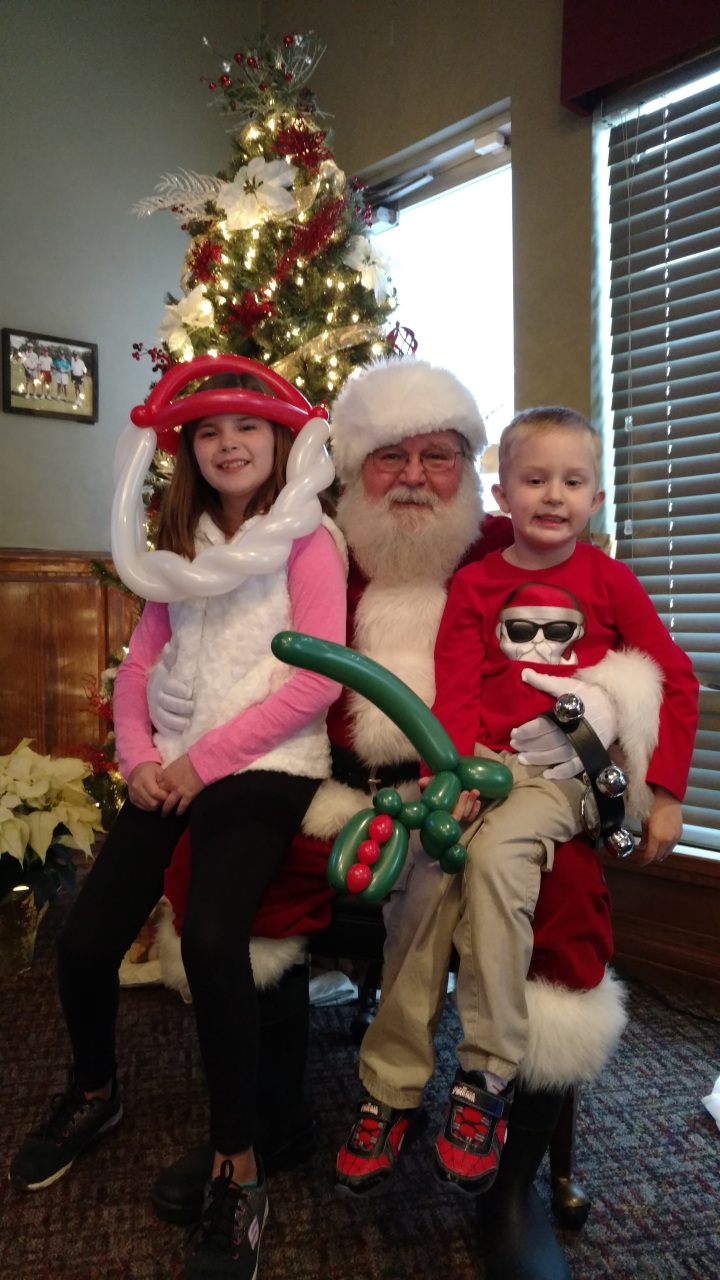 First of all, I should make this clear- I don’t HATE Santa Claus. Santa has long been a very beloved icon of the Christmas holiday for me; some of my favorite memories of Christmas as a child involve the magic of good old Saint Nick. My issue with Santa is that, at the end of day, he is really just a deception. I mean, let’s face it- Santa Claus is a lie. A lie that I, and countless other parents around the world, tell children every Christmas season. A nice lie, a happy lie, but a lie all the same. And I’m a little uncomfortable with that. Because the price of believing in Santa is that one day you will find out that he is not real. That the presents waiting for you on Christmas morning were not delivered by a jolly fat man dressed in red, who comes from the North Pole in a sleigh pulled by reindeer. Instead, they were put there by your lying, deceptive parents the whole time. I remember the pain of losing Santa, and it pains me that that day is coming for my children, too. My son is 5 and still fully committed; my 9 year old daughter is having doubts (the only thing keeping her hanging on is fear the presents will stop if she says she doesn’t believe). I don’t know how she is going to handle the truth, and it stresses me out to think about it.

I still vividly remember the day I found out the truth about Santa. I was 8 years old when my older sister let the cat out of the bag, though it was totally an accident. In my sisters’ defense, they had had to keep the secret for a long time- most of my childhood I was the only sibling young enough to still have Santa, and they worked very hard to help my mom keep the Santa thing going all those years. Anyway, I was sitting around our dining room table with a bunch of my family members, just chatting. I don’t know how it even came up, I wasn’t even paying that much attention to the conversation, but all of a sudden, I hear this:

“Ugh, I remember when I found out there was no Santa. I was so mad at you guys, Mom!”

Wait, what? What do you mean you found out there was no Santa? My sister, totally forgetting I was sitting there and still believed, kept going, lamenting about her anger at being lied to her whole life. I looked at my mom and knew it was true when I saw her face. She was staring wide eyed with gritted teeth at my sister, clearly trying to telepathically signal her to shut the hell up. I looked around the table and every family member had the same “oh shit” expression on their faces. Finally my sister noticed the looks, too, and realized what had happened. Her eyes got wide as she guiltily looked at me and said, “Oh…..sorry. I forgot you were here.”  It was like being slapped- no Santa? Really? The whole room was silent. I looked at my mother and said, “Mom? Santa isn’t real?” The poor woman looked like a deer in headlights; she was not prepared to have this conversation. She just blinked for a minute, and every pair of eyes in that room were fixed on her- would she try to recover or would she just ‘fess up? With a pained expression on her face, she pressed her lips together and gave a small shake of her head. “No”, she said, quietly. “He’s not.”

I remember feeling shock first and then anger. “Well then, who do the Santa presents come from-you?” She gave me a regretful nod, and I sat back, arms crossed, and began to stew. “You LIED to me? This whole time? You all knew he wasn’t real but told me he WAS!” I remember my eyes tearing up- what a betrayal! I felt like my whole family was in on a conspiracy against me, the big rotten liars! Mom explained the whole thing, how it is really about the idea of Santa and it doesn’t matter who gives the gifts, it’s just about the magic of Santa. And all I thought was blah, blah, blah, big fat liars. I then asked about the Easter Bunny and Tooth Fairy and was dejected to find, of course, they weren’t real either.

The next day at school I knew I shouldn’t say anything to anybody, but I just really felt like I had to talk to someone about this.  At recess I told my best friend I had learned something bad about Santa last night. She looked at me with an incredulous look her face, raised an eyebrow, and with a smirk said, “Santa? You don’t still believe in Santa, do you?” Oh, that was just great. Not only was Santa not real, but I was a nerd for still thinking he was- lovely. Talk about adding insult to injury.

From then on, Christmas lost most of it’s magic. I felt a little surly when I watched every Christmas special that year; Santa is pretty much a mainstay in every bit of Christmas pop culture, and for the kids that don’t have Santa anymore- or never did- it can be a lonely feeling. A woman I know said that her ex-husband, who is Jewish, grew up believing for much of his young life that Santa didn’t visit him because he was a bad boy. He didn’t realize it was because Jews don’t celebrate Christmas- ergo, no Santa; he just knew from pop culture that other kids got gifts from Santa unless they were bad. So he felt he must be bad since Santa never showed up, not even once. How tragic is that? I also know families who follow the Christian faith in a way that does not allow Santa Claus; how left out must those children feel, when Santa is shoved in their faces so much every Christmas season? For all the positives of the Santa Claus story, there are certainly negatives, too.

So then I become a parent, and the inevitable question comes up- to Santa, or not to Santa? Part of me thought it would be better to just not do it, never start the tradition so that it would never be taken away. Then I would never have to lie to my kids and worry that they wouldn’t trust me anymore. And c’mon, being Santa is a pain in the ass (just ask my husband, who was up until 3 a.m. building my son’s massive Hot Wheels garage last Christmas Eve). My mom was upset with me when I told her this. She always said, until the day she died, that she believed in Santa Claus, and no, she was not clinically insane- she knew he physically wasn’t real, obviously (SHE was my Santa, after all). She just believed in the spirit of Santa and the ideology behind him, and of giving kids a little bit of magic. As adults, we don’t really have magic anymore, and she was right- it was magical to believe in Santa. The excitement (or dread, if you had been up to no good that year) of wondering if he would come, and what he would bring you- well, Christmas as a child wouldn’t have been the same without him. I loved Santa, and going to Santa City every year (shout out to my hometown, Santa City is the most awesome way ever to see Santa) was my favorite Christmas tradition. And although it sucks to lose the Santa illusion, I really am glad I got to have it, at least for awhile. So, my husband and I took the Santa torch from our parents and have passed along the tradition, for better or for worse. And when the time comes to have to face the music for the fibs we been tellin’, I’ll tell my kids what my mom told me; we did it all for the magic….and then probably get our asses chewed severely; my daughter doesn’t suffer fools lightly.

Hope your holidays have a little magic, too- even if it comes in a bottle from the liquor store.

This is a text widget. The Text Widget allows you to add text or HTML to your sidebar. You can use a text widget to display text, links, images, HTML, or a combination of these. Edit them in the Widget section of the Customizer.
Loading Comments...
Comment
×
%d bloggers like this: