So, for the past few months our family has been living with a bat. We have a bat cave. We used to call it the “attic above the garage”, but now it’s a bat’s apartment. And I don’t like it.

The whole saga began several months ago, in the early Fall. I woke up one night to a sound above the ceiling; a tippity tippity tippity tap sound. Something was moving around above our bedroom. GROSS!!!! My mind immediately says “rat” and I freak out and rouse my husband awake.

My husband sits up sleepily, eyes still closed, straining to hear it. It’s all quiet, so he thinks I’m nuts and dreamed the whole thing. We lie back down and as he falls back to sleep, I lay glaring up at the ceiling. I heard something, damn it, I’m not crazy. A bit later, there it is again- tippity tippity tippity tap. I shake him awake again.

“I hear it again! It’s a rat- a RAT! I just know it!” My husband says there’s no way it’s a rat, it’s probably a mouse, if anything, and he’ll take care of it tomorrow.

By the next morning, I had forgotten about it, and didn’t remember until about a week later when it happened again. More freaking out occurs, more waking of the husband, more lying in bed creeped out, it sucked.

My husband puts some d-Con up in the attic, assures me that this will do the trick, and the mouse is as good as dead. This makes me very happy. Screw that mouse.

A couple of weeks later, the sound is back. The mouse is NOT dead. This makes me very unhappy. Screw that mouse! Only now, my husband no longer thinks it’s a mouse…..ummmmm, what? What the hell is it then??? He calls an exterminator who delivers some very unsavory news.

The exterminator thinks it’s a bat. A bat. A BAT! In the attic, a bat! All of a sudden, I take back everything I said about the mouse; the mouse is awesome! Please go back to being a mouse!

What do you do about a bat in the attic? The first option was not pleasing: Learn to live with it until Spring.

No. HARD NO. What the hell is this guy thinking? Live with a bat? Not a chance! Ok, fine, since we found that option fairly unacceptable, our other option was to figure out how the bat is getting in and out of the attic, and put in a bat cone. What is a bat cone, you ask?

This is a bat cone: 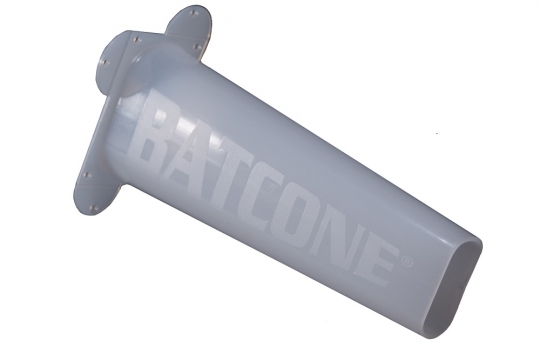 You install this little gadget wherever the point of entry is, and it allows the bat to get out, but not back in. Perfect! This sounds like a great solution for Hotel Attic Bat Lair; the little jerk can check out, but he can NOT check back in.

Unfortunately, it was not to be so simple. The only way we can figure he is getting in is through the vent at the front of the attic; it has several open slats. How do you put a bat cone there? You don’t. And that’s the reason why Option 1 is still in play- we are stuck with an unwelcome bat roommate until Spring. Turns out, he’s up there for a safe place to hibernate, and as far as the exterminator can tell he probably doesn’t plan to move out until it gets warm again. And the reason we only hear him some days and not others is that he is mostly just snoozing up there, and only wakes up on the warmer days to go eat. Just. Freaking. Great.

To be honest, most of the time I forget he’s up there; he’s been asleep and quiet for weeks due to the incredibly cold weather we have been having. I haven’t thought about ol’ batty poo for some time now.

With the warming trend starting, the little bastard is awake today and making noise. I’m definitely thinking about him today. He’s so creepy. I hate him. Why is he even awake right now? It’s daytime; isn’t he like a vampire that can only be awake at night? Apparently, Dracula is not a fact based document because no, they are not like vampires, and sometimes they are awake during the day- especially if they are hungry and preparing to go hunt. The more you know! Ugh.

I don’t like living with a bat; I want him to GO AWAY. Many “helpful” people keep pointing out that, hey, bats are great animals; they are nature’s pest repellent! He’s probably keeping all sorts of vermin away and he’s great for the environment! And I get it; bats are important. I don’t want to kill the thing (I mean, sometimes I do….but mostly no). I just don’t want to share a home with him! He creeps me out, and he’s probably really ugly (it’s not his fault, but c’mon, most bats are ugly AF, we all know it). He makes me paranoid that he will get into the house, and I have a good reason for that: A bat got into our house a couple of years ago, and I’m still not over it.

One evening, my son says, very curiously “Hey, Mom….what’s that?” He is pointing up in the air. I turn around as something flies by my head. It’s a freakin’ bat, flying around the dining room. I scream, which scares the hell out of  my son, and run to open the kitchen door that leads to the garage. I’m standing in the garage hoping the open door will encourage the bat to escape, and I’m seriously freaking out- how do you get a bat out of your house?? My son is hysterical inside the house, as the stupid bat did not come out the door, but is instead doing laps around the living room. I yell for my son to come out to the garage and he comes running, screaming and crying. He is so scared and upset that I take him inside the car to escape the bat. Meanwhile, in the house, my husband and daughter heard the commotion; my daughter also gets hysterical and runs downstairs to hide from the bat, and now my husband is left to deal with the flying beast (I was not budging from that car!). I’m soothing my shaking son and picturing what sort The Great Outdoors style bat catching my husband was performing in the house (remember John Candy and Dan Akroyd wearing the sporting gear, trying to catch a bat with rackets and pots, or whatever? I was pretty sure that was going on….). In the end, Brian wound up catching the bat in a towel, and flinging it’s scared and hissing ass out the back door, and the kids and I were a little scarred for a while. Best we can tell, that bat got in through our chimney flue that we had negligently left open, so let that be a lesson for all of you- close your damned flues! I learned that day, in a battle between me and a bat, the bat will win; I’ll be locked in my car, while the bat lives happily in my house, watching Netflix on my tablet and raiding my liquor cabinet. Not cool.

So you see, I have quite the history with bats and their rude insistence on just making themselves at home in MY home. Why MY house? What about me and the hubs makes bats think we are cool people to hang out with? The answer only hit me recently:

Obviously, my husband is Batman.

There is no other explanation. I married Batman- and I’m kinda sore about the whole thing because being married to Batman, I would expect to be a lot wealthier, no? I mean, we don’t even HAVE a private jet. No butler either (although, our last name IS Butler…hmmm). Other proof that my husband is Batman is that he is really quite unfazed by the fact that we have a literal bat cave above our house; he’s fine with the bat. He is never as creeped out by the bat as I am; he doesn’t even seem to care. And as we have a pretty strict no pet policy in our house (his rules!) this apparently does not apply to bat roommates. Coincidence? I think not.

I suppose the only thing to do now is to start donning costumes and fighting crime; historically, that has been the norm for those who own bat caves, and who am I to buck the rules of civilized society? Perhaps we can have a Batman-The Incredible’s cross-over kind of thing and involve the kids our new super hero lifestyle; they do say it’s important for families to do activities together. I have some ideas for costumes, with a big “B” on the front of them because it can stand for both “Bat Family” and “Butler” so it just really works, ya know?

I’ve also decided I should give the bat a name; I usually just call him “Jerkwad” whilst I yell profanities at him through the ceiling (my hope is that I’ll hurt his feelings enough to make him move away- it hasn’t worked yet, he has great self-esteem), but it would be nice to have a name to call him when I’m reading him the weekly riot act. And since we are going to be together for quite some time, (Spring is sooo far away, sigh….) I really should try to be nicer to the bat if he’s up there eating all the bugs, paying rent in the only way he is capable. But, I can’t think of a good name, so if you can think of a stellar name for a bat, hit me up in the comments and help a chick out, would ya?

Until next time, stay classy- and don’t marry Batman (he’s mine, bitches!).

Follow I Am Sam Butler Blog on WordPress.com
Join 530 other followers

This is a text widget. The Text Widget allows you to add text or HTML to your sidebar. You can use a text widget to display text, links, images, HTML, or a combination of these. Edit them in the Widget section of the Customizer.
Loading Comments...
%d bloggers like this: